For ages it was a competition of honor and glory.

Noble warriors from around the globe were invited to take part,

each seeking to win the title of Grand Champion.

But that was a long time ago...before the tournament was corrupted

by the evil demon Shang Tsung, a warrior who took not only lives of his opponents,

but their very souls...with the aid of his pupil Goro, a hideous half-human dragon

Tsung began a domination of the contest which has lasted for centuries. 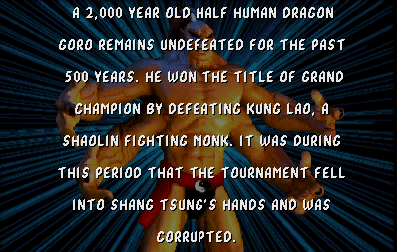